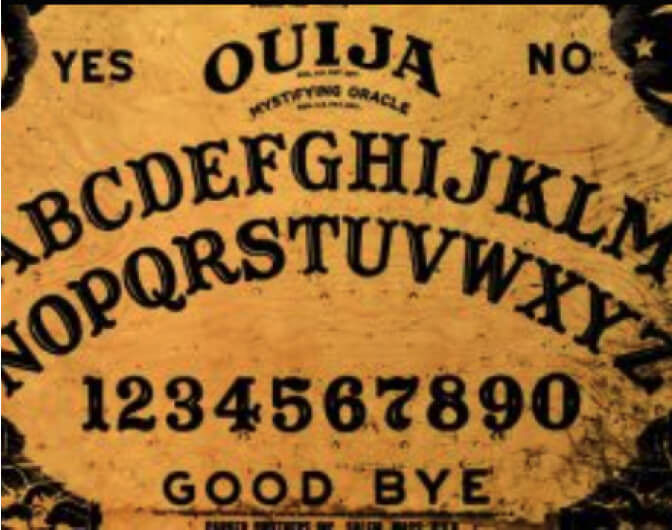 Ouija Board - The Inexorable Rise of the Jargon and Acronyms

The past year has seen the addition of 1,000 new words & phrases to the Oxford English Dictionary, including: ‘Spad’ (special political advisor); ‘Masstige’ (mass market products marketed as prestige luxury goods) and the enduring car crash that is, ‘Impactful.’

So at the risk of becoming a ‘milkshake duck,’ I thought this might be an apt moment to ‘open the kimono,’ ‘peel back the onion’ and do a deep dive before making some ‘bleeding-edge’ ‘thought leadership’ observations about the worst excesses of industry buzzwords, a boring affliction that I have (ironically you understand), afforded the acronym OUIJA – the OverUse of Inane Jargon & Acronyms.

And while we’re sailing on the good ship irony, you may be interested to learn that the word Ouija was originally the name for a harmless parlour board game, the trademark for which resides to this day with the Hasbro toy company.  Dreamt up in 1890 by one Elijah Bond, it was however quite some time before it was hijacked by table-knocking self-promoting charlatans to remotely contact people on ‘the other side’ (kind of like an analogue version of Linkedin, albeit with dead people and fake ectoplasm).

Don’t get me wrong. I love language and its power to inform and move the soul, which it does in part by staying fresh and, unlike the séance’s alleged spirits, alive. It’s a beautiful living, breathing, evolving organism.  But in recent years, partly driven by Twitter’s incessant need to explain all complex life in fewer than 280 characters, language has become more invasive giant knotweed than beautifully cultivated bonsai in terms of the rapidity with which it grows. As a consequence, long established phrases are being aggressively supplanted by mutant, hybrid and often ‘repurposed’ terms and symbols, which require the equivalent of a social media enigma machine (otherwise known as the brain of an average 13 year-old) to keep up with and decipher.  For instance, driven by an insatiable desire for ‘outside-the-box’ ‘blue-sky-thinking,’ the good old ‘brainstorm’ was initially usurped by ‘ideation bursts,’ until now, the entire hipster population of Shoreditch is apparently engaged in ‘thought showers.’ Whatever next? Tantric Mind Drizzle (which incidentally, would be the best name ever for a prog band).

Indeed, entirely apposite in this age of Twitter, the term jargon is itself a recycled French word that originally meant ‘the warbling of birds,’ but which over time came to describe the esoteric sub-language employed by specific professions, of which the marketing sector is undoubtedly one of the worst offenders.

Believe me when I say, there will be a day in the not too distant future when you’ll retrospectively wince with shame if you’re still knowingly employing the phrases ‘circle back,’ ‘synergistic’ or ‘learnings,’ although I would place money on the fact that you’re already screaming on the inside. And if you ever find yourself uttering the heinous words ‘loop me in,’ I urge you to reconsider them as a metaphorical noose around your neck, because you will have just committed the equivalent of professional suicide.  Like the name of Harry Potter’s shadowy nemesis, they are the words that must never be spoken (at least not in that order – although if you say them in any other combination you do risk sounding like Yoda).

With an eye on my KPIs (dear god, why can’t we just call them targets), it is of course mandatory in these turbulent times for every article written about anything to reference George Orwell’s post-war dystopian classic 1984, so I shan’t disappoint you.  Brilliantly satirising the rise of nonsensical political jargon, Orwell foreshadows such oxymoronic and just plain moronic terms as ‘friendly fire’ and dare I say it, ‘Brexit means Brexit.’ In the novel, the official state language of Oceania, NewSpeak, is designed to make it impossible to contemplate rebellion, with the word for peace literally translating as time of war.  So the next time you’re calmly told by your HR director that the company has entered a period of ‘negative growth,’ it could be time to consider: A. your future at the company, or B; Openly face-palming at their OUIJA, which of course may well lead to you being forcibly marched out of the office anyway.

A (now eminent) friend of mine, once became so incensed by the proliferation of idiotic jargon at the environmental engineering consultancy where he worked, that in a one-man satirical protest against the corporate double-dutch, he addressed a senior group of besuited engineers through the medium of dub reggae.  Adopting a broad West Indian drawl over a Marleyesque backing track, he intoned, “there’s contaminaaaaation, across the naaaation. We need remediaaaation at the destinaaaation,” to the increasingly baffled group.

You could argue that, by briefly shocking them out of their corporate malaise, he got their full attention far more effectively than if he had resorted to the standard stream of stale buzz-words, which raises the big question that we must all ask ourselves. Does the use of any given piece of jargon help us to communicate a particular concept more effectively than using an understood existing term, or just plain English?   If the objective answer is no, then we should perhaps think again, even if it goes against the marketing industry’s strong instinct to create new fashions and so ‘push the envelope.’  Consider as an allegory if you will, the hip hop group Kris Kross’ mercifully brief penchant for wearing their jeans back-to-front in the early 1990s. Even at the time, it didn’t take an Einsteinian intellect to realise that it was a fashion cul-de-sac built on top of an eroding cliff, and yet many soggy-fronted Kris Kross devotees initially followed their lead, before finally admitting to themselves what they had secretly known all along.

When deciding whether to use a specific piece of jargon or not, it’s also important to consider from whence it came and its relevance to the audience that you’re addressing.  A prime example of this is the term ‘PR survey,’ which will conjure up wildly different images to a nurse (Per Rectum,) a politician (Proportional Representation) and of course, someone of a marketing persuasion (Public Relations).  And if you continue to ‘reach out’ to advocate ‘growth-hacking’ and ‘digital penetration’ when speaking to the ‘wrong’ crowd, you may well find yourself the unwitting recipient of a surprising ‘human-to-human’ ‘drill down’ session.

So ‘moving forward,’ let’s ‘workshop this’ and figure out ‘what our big rocks are’ (kill me now) when it comes to why we love to hate jargon so much, even if we all use it on a daily basis?  In the end perhaps, Jargon is just like any other fashion. We reserve particular disdain for anything championed by people that we have reason to mistrust, or whom we perceive as being at a different point on the fashion bell-curve to us.  On that basis, it’s perhaps understandable why anything coined by the health-and-safety and finance departments is instantly demonised by creatives, although the reverse is also the case.

Granted, selective and judicious use of jargon can help us to integrate with a particular clique and signals to outsiders that we possess arcane knowledge and expertise, but it’s worth remembering that true innovators are more often than not, lateral thinking mavericks unencumbered by the latest trends.  For that reason alone, I believe that marketeers should cultivate a healthy scepticism of industry buzzwords, even though, ironically once again, we’re more often than not the very people that make this shit up in the first place.