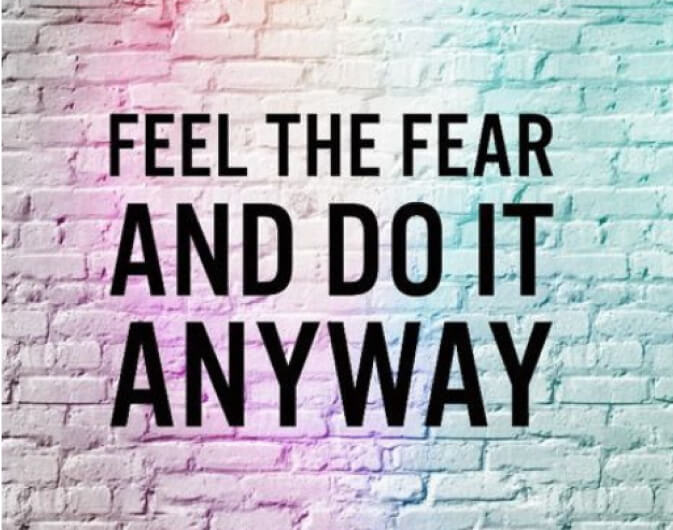 Feel the Fear and Do It Anyway

I remember being tipped off about this book in my late 20’s. Won’t, for a change, bore you with the deets as to why. Anyhoo I read it in about twenty mins and it has served me well ever since.

As a “successful” biz woman I have had to feel the freaking fear and do it anyway a lorra lorra times and still do. Fear of failure is often an entrepreneur’s big driver; and there’s rarely an off switch including the guilt-ridden fear that your career is compromising your responsibility for and delight about being a working Mum and/or Dad.

The slightly galling thing though is – when you have felt the f’ing fear and done it anyway – you seem now appear to and hear from those that chose/choose not to, that “well you were lucky”/“you’re so lucky” …

Fuck luck. You make your luck. Sorry but you mostly do. Whether it’s what I did, working my arse off through many a long and lonely night inc breast feeding my babies whilst writing a new biz pitch; or another roll of a fearless dice. What’s your luck story? Maybe you decided to have a flutter; or you took a ridiculous leap of faith’s fortune; which btw might be you met a true friend because you opened up about this or that; or you got that promotion because you finally accepted that, you know what? #your’ebloodysoworthit. Gals and guys: it wasn’t luck. You took a fearless chosen chance.

I remember my early fearsome years. I wasn’t pretty enough; clever enough; was I kind enough? That no doubt continues to be a vibe, though tbf, being nearly 53, it’s a v boring loop. And anyway, those are internal fears. My own shit.

As a teenger my early external fears were:

2. nuclear war was about to kick off when I knew duck and cover was not an option

So I felt the fear and:

1. decked Janina Butters when she asked me outside “right now Moxham” for a scrap, ‘cos she thought I was trying it on with her boyfriend Peter Carruthers when I absolutely was not. Despite my attempts to pacify her in the bogs with compassionate Northernsims, to calm the pubescent storm, she insisted we drew handbags at dawn, rather than dance round them. I threw a sad yet fearless fist.

3. And became a super swot which got me a half scholarship to Oxford bloody Uni.

So what makes people or teams or brands inc nations fearless? Musing on this albeit briefly as I is a tadge busy at the mo, there appear to me to be 3 reasons why you might pump that gun:

1:) You have no choice. You’re already in the trenches. Fearlessness is built into your coal face DNA, and can only carry on; even to take that final bullet

2) You cannot bear the grind of some kind of hamster wheel and, quite frankly, you know life is way too short to conform to some weird status quo created by cronies who are actually slaves to a rhythm you don’t want to dance to.

3) You are a narcissist on acid. You didn’t have to read The Art of War as your machievllan ego is pumping through your poo and you are just so right. You fear nothing and no one. Especially yourself. You can’t possibly look in a clear mirror as your fearlessness is the armour protecting your childhood heartbreak and vulnerability.

Sadly, right here and right now – though 1 & 2 fearless peeps continue to make sure this heavy, mad and fab world keeps turning, not always, but often for good – fearless #3 is clearly the murky magic mantra.

T’was it ever thus? Poss; bloody hope not when our kids get a joined up and joint handle on the reigns/reins.

But for now, in 2018, our world, it seems, is being run, controlled and contorted by the distorted egos of people damaged no doubt as kids, for whatever rhyme or reason.

Which segways nicely into Trump Trumpety Trump Trump Dump. The most extraordinary current case study to underscore ma point. This hairy hubris-brimming bully runs roughshod over anything and everyone. Because he’s so fearless he truly, totes madly, and def not very deeply, does not give a flying fuck.

He’s playing us “underlings” like fiddles. Like the Pied Piper of Hamlin nuclear fuelled. Pushing any buttons he can, (one day the big Red one?). Because his fearlessness tells him he can, to make the less fearless than him so fearful that they then flex to his POV. Even though that changes with the wind as he farts forward.

And people are buying it.

Most notably “leaders” – both foes and allies. How would or could you know which team you’re in btw? One min you is my NBF as I act out my playground heartbreak; next you’re nuked as I fear you and probably my true, authentic, de-layered self.

I could pontificate on the man who would be King’s, (yep, trot on Chazzer, Liz etc.etc. Hold on, not the beautiful princesses), UK visit. The strategy is to try to outsmart by creating abject chaos. Tactically, he continues to throw his predictable incendiary devices. In Blighty, at our tired, fragile and poss broken party political system. As Donald, knows everything and nothing. In his head. Wherever that resides amidst and amongst his “fake” hair. Fearlessness can even deliver, it seems, natural toupees.

So Donald unites Boris and Nigel if nec to form his new department of the UK. Perhaps call it BNJF do it.

Whatever the plot, the not so reasoned treason, let’s beware these fearless fops. Fearless 1 & 2 stand up and be honoured. Work together to make the Fearless 3 (dare we name the other two), fried egos.

P.S. Crowdsourcing from Fearless 1s & 2s a new tract, The Art of More.